The Financial Health of Philadelphia-Area Nonprofits (2017) 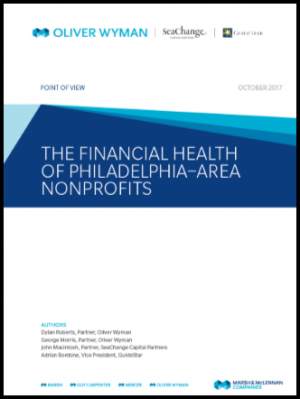 This report, commissioned by The Philadelphia Foundation, assesses the fiscal health of the nonprofit sector in the five-county region of Philadelphia. The region’s nonprofit sector provides valuable services, employs thousands of individuals and is a significant economic generator. In a time of political and fiscal uncertainty, understanding the sector’s financial health is crucial for organizational leaders, boards of directors, funders, government and the general public.

This is the second report commissioned by The Philadelphia Foundation that examined the region’s nonprofit sector. The first, published in 2010, found there were over 15,000 nonprofits in the five counties, supporting 242,000 employees with more than $11 billion in annual wages. This new report examined data filed by roughly half of the region’s nonprofits and reported on their IRS Form 990.

Nonprofits should consider instituting practices such as risk management assessments, scenario planning and establishing financial stability targets to both improve their current financial health and survive any drops in funding that may come their way.  Organizations considering transformational repositionings should consult with the Nonprofit Repositioning Fund, supported by HealthSpark Foundation and eight other philanthropic investors.

An event or an era? Resources for social sector decision-making in the context of COVID-19

Tough Times Call for Tough Action: A Decision Framework for Nonprofits and Boards